OFF ROAD Macedonia
Mariovo region is a hilly mountainous area that roughly occupies the southern and central part of the Republic of Macedonia. The region is surrounded by the mountain ranges of Nidze, Selecka, Kozjak, Dren, and part of Kozuf Mountain. The terrain is cut by Crna River which divides the region in two sub-regions called Small or New Mariovo located on the left side, and Big or Old Mariovo, located on the right side. Administratively Mariovo region belongs to the municipalities Novaci, Kavadarci, and Prilep. In the past, it had more than forty settlements.

There has been a continuity of an organized form of life in Mariovo from the prehistoric period to the present. During ancient Macedonia, the area belonged to the kingdom of Pelagonians. There are also records that both Illyrians and Thracians settled in Mariovo, which were later assimilated with the migration of the South Slavic tribe – Brsjacs.
In 1019 during Byzantine rule, the area was mentioned as “Merihova”, when together with the neighboring area of Meglen, it constituted the Meglen Bishopric.
Throughout history, Mariovo had many rulers from Byzantium, Bulgaria, Serbia, and Turkey, but that was more formal, due to its inaccessibility and geographical autonomy.

Even today in Mariovo, the legend of Princess Maria, also known as Mara Sultania, Kala Mara, Tamar Mara etc., lives and is transferred to future generations. The legend says that Mary (Maria) was a princess, daughter of a Christian ruler, widely known for her beauty, was supposed to become the sultan’s wife via arranged marriage. She was educated and very intelligent, and the sultan quickly fell in love with her. After a certain period of time, when she became older, she wanted again to convert to Christianity, and since the sultan loved her very much, he allowed it. But as a Christian she couldn’t stay in his harem, so she was allowed to choose her new residence.
First, she went to the Treskavec monastery near Prilep, wanting to confess her sins and convert to Christianity. She was rejected by the head of the monastery, she left but soon after returned with a large army, killing all the monks and leaving the monastery in flames. She headed toward Vitolishte village, which she chose for her new home and she founded the Chebren Monastery on the Crna River. The whole region with imperial decree was assigned under Maria’s rule, and thus it became Maria’s land or "Mariovo".

This is one of the legends, which is supported by certain historical records, but it’s a fact that in the first centuries of the Ottoman rule, Mariovo region had a special status of an autonomous province ‘Has’. As a result of this autonomy, was a clean and compact Slavic area with minor cultural and other influences, as well as preserved old Slavic names of different places. 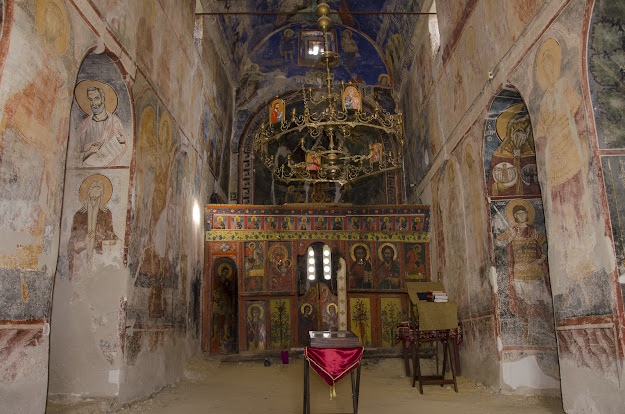 Despite Mariovo’s isolation throughout the history, there are some events that are worth to be mentioned: first, the two rebellions against the Ottoman rule, one in 1564/65 and the other one in 1688/89; second, the significant participation of the local population in the Ilinden Uprising in 1903, as well as the particularly devastating post-Ilinden period and the First World War.
Mariovo achieves its greatest development in the period after World War II, until 1970s, when a sudden process of massive depopulation began, heading towards the nearby cities and overseas countries.
Today Mariovo region is probably the least populated area in the Balkans.
Folklore and ethnological features of Mariovo are unique and they need to be cherished and preserved. The symbiosis between the human and the surrounding countryside is particularly remarkable and causes lofty feelings. This may be noticed in many rural areas in Macedonia because it is a typical feature of our traditional architecture. The exceptional harmony in this region is a result from the natural geomorphology of the ground, which inspired our people to use natural materials, and built wonderful and authentic settlements with stone, mud, sticks, and straws, as well as churches, monasteries, water mills, barns etc.
Tags: travel